Ever wonder how the various Reformed and Presbyterian denominations in North America are related? See this Presbyterian and Reformed family tree. 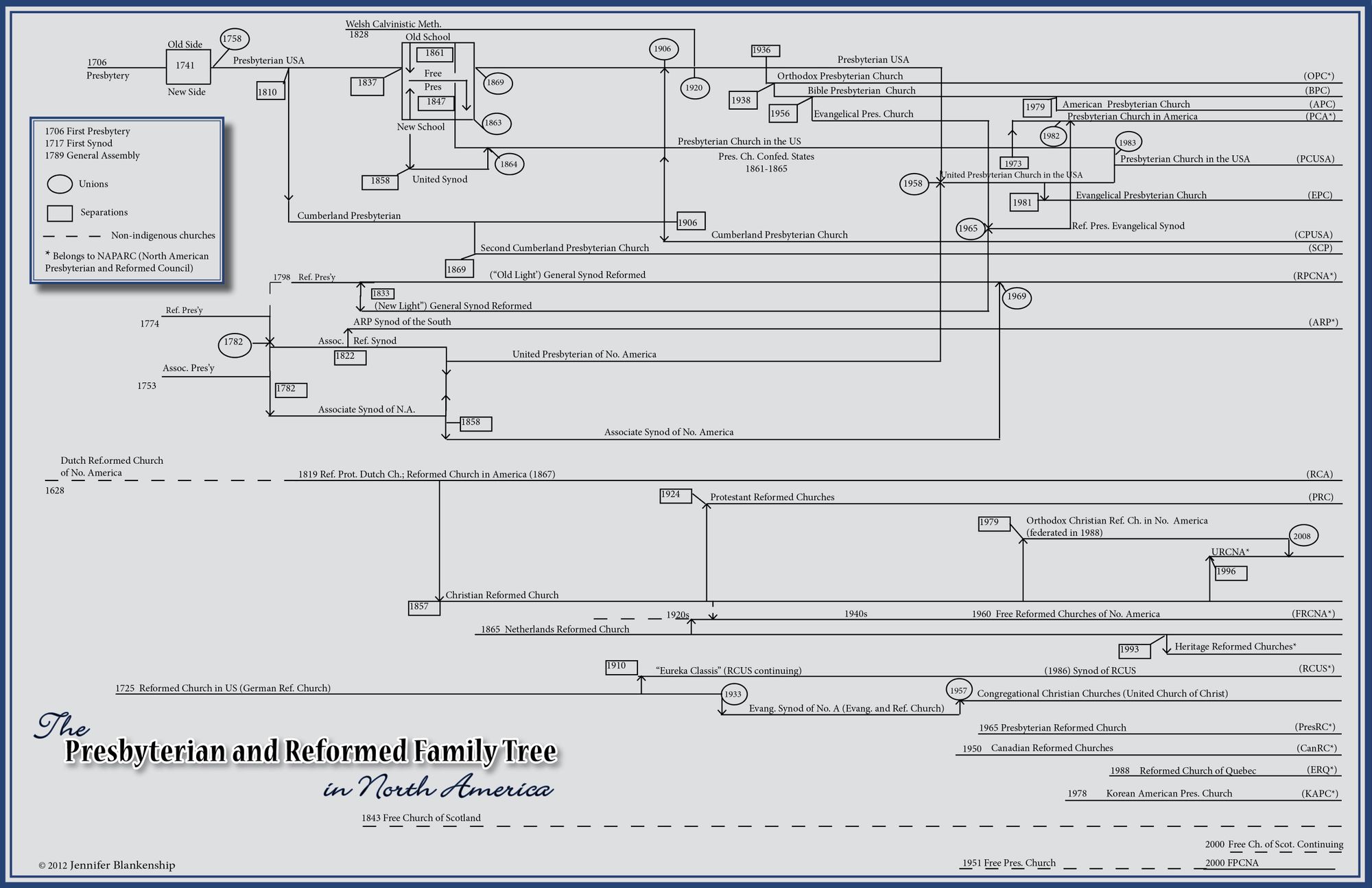 It is designed to help answer your questions! It builds on similar charts that have been made in the past. It especially seeks to mark the history and relationships of member churches of NAPARC (North American Presbyterian And Reformed Council). More detailed charts of either Reformed or Presbyterian bodies may be found elsewhere, but this document contains them all on one page.

When creating such a chart, guidelines must be established that will determine what to include and what to omit. The first priority in this chart is to show the relationships of NAPARC denominations. Thus, many micro-Presbyterian churches are left off the chart. Small bodies included seem to us to be of greatest interest to NAPARC members. And, recent developments in the mainline Presbyterian church have also been excluded (e.g. marking the migration of many to the Evangelical Presbyterian Church) since they do not affect NAPARC bodies. Mainline Presbyterian developments in Canada and Mexico have also been omitted.

Next, please note that only relationships within North America have been listed. The Reformed churches, in particular, have complex origins that are difficult to show clearly without somehow linking them back to groups in the motherland. However, viewers will still gain a sense of where the groups stand today and gain some sense of their history. Those seeking further clarity on the origin of the Reformed churches will be helped by Bill VanDoodewaard's history. Similarly, there is no connection between the Free Church of Scotland and the Free Church of Scotland in North America because when those bodies separated in Scotland, there were no divisions in North America, and the Continuing congregation arose in North America without connection to the Free Church congregations already here.

For the sake of space, some splits and reunions have been omitted.

Informal realignments have also been generally omitted. Strikingly, there have been no unions or divisions between the Presbyterian and Reformed bodies, though there have been virtually whole congregations, and perhaps larger groups, that have shifted across the divide to embrace either the Westminster Standards or the Three Forms of Unity as authoritative.

Finally, there will forever be quibbles over how to mark divisions - which group really departed and thus who should have the "straight" line on the chart.

Further improvements may be made in the future. Perhaps the thickness of the lines will be changed to show the sizes of the various churches - though to do so accurately will require hours of research in order to capture the increase and decrease over the years.

I am grateful to Jenny Blankenship, secretary at Second Reformed Presbyterian Church, for creating this document. Any errors present have resulted from incorrect information I have supplied. May this chart be used to teach us what the Lord has done in history and motivate us to pray for that which Jesus prayed when he said to the Father: "keep them in your name, which you have given me, that they may be one, even as we are one" (John 17:11).

The calendar date alone haunts us because the numbers match what we dial in an emergency.  Pictures of the horrific scenes draw out of our memories the fear and tears of that macabre

Every now and then, people ask me why the Bible talks so much about fearing the Lord. Isn't it odd to speak of serving God using a word like "fear"? It