When I taught algebra, trigonometry, and calculus to high school and college students, I would often say to them that math is a language. Math follows certain grammatical rules. Often the trouble students have with solving problems is that they read the expression or equation wrongly. Students often forget the rules of syntax, then become mystified by their wrong answers.

For example, consider the answer to this relatively simple expression:

Several answers are possible. 5. 3. -1. Or perhaps you came up with something else. But if you know a rule of math grammar known as the "order of operations," then you know that as you work from left to right you are supposed to do the multiplying before adding or subtracting. Thus, the one and only correct answer is 3.

When it comes to the book of Revelation, you quickly find the presence of many numbers. These numbers add (no pun intended) to the mystery of the book. Yet, similar to the example above, remembering the Bible has a "math language" of its own can help in understanding the passages containing the use of numbers. Here are five of Revelation's math language rules to follow.

While retaining their numeric value, numbers are highly symbolic in Revelation. When you see a number in Revelation, be it a 7, 666, or 144,000, you should take the number at its face value (math puns are hard to avoid). In other words, seven trumpets are seven trumpets, not a hundred trumpets. Yet in this apocalyptic book, which is packed with symbols, the reader should understand the given number was chosen to represent a greater spiritual reality. John repeatedly wrote of seven trumpets as well as seven seals, bowls, etc., not six or eight of them. So the seven is symbolic.

Certain numbers represent a particular truth. As Jared pointed out a few years ago, certain numbers in Revelation emphasize spiritual truth. Understanding these associations greatly aids in interpreting the book. The main ones, with some references given, are seen in the following table. 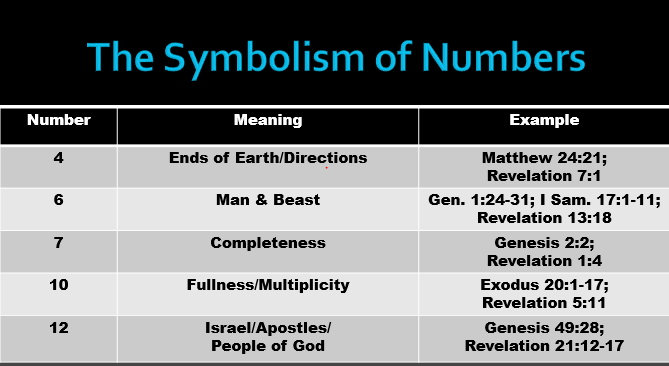 Numbers are doubled, repeated, or multiplied to emphasize or fuse truth together. Numbers can be doubled (such as the twenty-four elders being twice twelve), repeated (like 666), or multiplied (the 144,000 equaling 12 x 12 x 10 x 10 x 10) in Revelation. Like the restatement of words in the Bible (think of the "holy, holy, holy" of Isaiah 6 or Jesus saying "truly, truly"), this repetition of numbers serves like an exclamation point on what is being revealed to give emphasis. Additionally (sorry - I can't help myself), the doubling of twelve, a number chiefly associated with Israel as the twelve tribes and the twelve apostles of the early church, is indicating the combination of the Old Testament and New Testament saints into one new body, the New Israel of God. This truth is further pictured for us in Revelation 21, where the new Jerusalem has twelve gates named after the tribes of Israel and twelve foundation stones with the names of the apostles on them (Rev. 21:12-13.

Often the text contains the clues for understanding the numbers. The principle of sola Scriptura that tells us the Bible is its own best interpreter applies to the numbers as well. For instance, when we read of Jesus standing among seven lampstands in Revelation 1, we do not have to wonder what they represent. In Revelation 1:20, John tells us they represent the church and her angels.

Likewise, who are the 144,000 of Revelation 7? The text makes it clear. After hearing their number with a perfect tribal breakdown of 12,000 per tribe, John says,

After this I looked, and behold, a great multitude that no one could number, from every nation, from all tribes and peoples and languages, standing before the throne and before the Lamb, clothed in white robes, with palm branches in their hands, and crying out with a loud voice, “Salvation belongs to our God who sits on the throne, and to the Lamb!”

John hears 144,000 (see 7:4), but then he sees an innumerable multitude. Like hearing of the Lion of Judah but then looking up to see the Lamb of God (Rev. 5:5-6), what is seen gives further definition to what is heard. The 144,000 represent the church, the new Israel, in all her completeness. Revelation 14:1-5 makes this understanding even more clear.

Perhaps this truth is most evident in one of Revelation's most famous numbers, 666. Found in Revelation 13:18, John tells us

This calls for wisdom: let the one who has understanding calculate the number of the beast, for it is the number of a man, and his number is 666.

Clearly we learn from John a few things about this number. The call for wisdom refers to using the Old Testament to decipher it. That the number represents a man who has become like a beast would be familiar to Old Testament readers as well, as numerous godless and idolatrous characters are referred to in this manner and have the number 6 associated with them (see 1 Sam. 17:4-7; 1 Kings 10:14; Dan. 3:1). Many commentators view the admonition to calculate what the number represents as a suggestion to take the name as it would appear in the Hebrew language of the Old Testament and add up the numerical values of the letters.

Now, I could tell you who this beast-man is. But that would be doing your math homework for you!

This episode comes to you in two parts. First, the guys discuss what transpired at the cross when Jesus said, "My God, my God, why have you forsakeen me?" How is

Gentle Reformation
—
The Math Language of Revelation
Share this