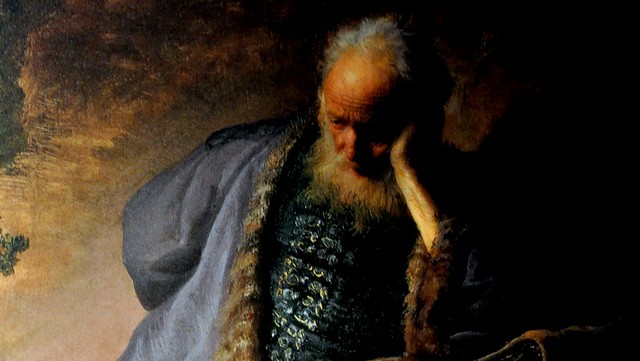 A few years ago a little book caught my attention. Though I had read it before I noticed, for the first time, that it was unlike most books I had ever read. It was poetic. It was tragic and sorrowful. It was graphic and stirring. It was intense and emotional. Most fascinating, however, is that it was a book that profoundly reflected the heart of Jesus. Not Jesus as we sometimes think of him--confident as he calmed the storm, bold as he preached the kingdom, jealous as he overturned tables, or silent as he faced his oppressors. But Jesus as he stood by the grave of Lazarus and wept (Jn 11:35). Jesus as he approached Jerusalem weeping over it (Lk 19:41). Jesus as he offered up prayers with tears (Heb 5:7). It was the book of Lamentations.

I'm going to guess that Lamentations isn't a book most of us are familiar with. In it, the Prophet Jeremiah is heartbroken and stunned at the destruction of Jerusalem, "How lonely sits the city that was full of people! How like a widow has she become, she who was great among the nations!" While the fall of Jerusalem is described in a purely historical way in 2 Kings 25, Lamentations does so psychologically--and in an overwhelmingly sorrowful way. It can be a very hard book. I remember one of my seminary professors warning, "Don't preach straight through it, you'll make your congregation depressed." It doesn't hit many high notes, and for the contemporary Christian it can be hard to connect dots to our circumstance and situation. But, if I can, let me offer some practical help in order that, if you choose to read it, you can do so with profit.

First, keep in mind that Lamentations is a lament for sin. In Deuteronomy 28 God proclaims the covenant curses for disobedience, and Lamentations is a fulfillment of this. Jeremiah isn't crying because of some nationalistic patriotism. Rather, he knows that the judgment on Jerusalem was brought by the Lord, "The Lord has done what he purposed; he has carried out his word" (2:17), he knows that it is deserved, "The Lord is in the right, for I have rebelled against his word" (1:18), and he perceives in it a call to repentance and reformation, "Restore us to yourself, O Lord, that we may be restored!" (5:21). Jeremiah weeps for sin and its effects. Nothing can be more sorrowful than sin, and it's time Christians learn how to weep for it. The New Testament reminds us that we are blessed when we mourn (Mt 5:4), and sorrow leads us to repentance (2 Cor 7:10).

Second, though Jeremiah was the human author he spoke as one who was carried along by the Holy Spirit (2 Pt 1:21). Practically, what that means is that in Lamentations the Spirit has provided the church with expressions and words to voice heartache and grief. It's filled with vocabulary befitting the greatest conceivable grief, "Is there any sorrow like my sorrow?" (1:12, see also 2:12, 5:3). If I can say it this way, Lamentations strikes the chord of faith to teach us how to express despair, misery, and sadness with the assurance that God hears the grief of his people, "I called on your name, O Lord, from the depths of the pit; you heard my plea, 'Do not close your ear to my cry for help!' You came near when I called on you; you said, 'Do not fear!'" (3:55-57).

Third, it emphasizes that even in our grief, there is order. Lamentations is structured in the most detailed of ways--though it's sometimes hard to see it. Chapters 1-4 are individual laments and each is written as an acrostic--at least in the Hebrew language. Chapters 1, 2, and 4 each have twenty-two verses corresponding to the twenty-two letters of the Hebrew alphabet. Verse one begins with the first letter, the second verse with the second letter, and so on. This is why some have called it the A-Z book of sorrow. Chapter 3 is three times as long with sixty-six verses, and each letter begins three lines. Chapter 5 isn't an acrostic, but maintains the twenty-two verse format. Even the structure implies an important theological point. God is not a God of disorder, but of order (1 Cor 14:33). The sorrow of a Christian isn't aimless and without direction, but it is ordered, controlled, and overruled by God for his glory (Rom 8:28).

Fourth, Lamentations reminds us that the God of all the earth will do right. The enemies of the church become, in the hand of the Lord, the instrument through which he exercises his discipline, "the Lord gave me into the hands of those whom I cannot withstand" (1:14). The people of God are the ones who are sorrowful and oppressed, "Zion stretches out her hands, but there is none to comfort her; the Lord has commanded against Jacob that his neighbors should be his foes" (1:17). Nevertheless, their sorrow is only for a time, "For the Lord will not cast off forever, but though he cause grief, he will have compassion according to the abundance of his steadfast love" (3:31-33). And the ungodly will not long endure, for to them "the cup shall pass" (3:46).

Finally, it sets us after Christ. Not only is Christ the true mourner–as noted above, but it drives us to him. Lamentations exhibits, though in a shadow, what it meant for Christ to become the divine curse to set us free from the curse (Gal 3:13). It raises us to him as the reason why God's mercies are "new every morning" (3:23). It presents to us a more perfect and lasting King under whose shadow we live safe and secure (4:20). And it teaches us to weep, to weep as long as it takes to get us to rest in the Lord Jesus Christ.

In Ezekiel 47:1-12 [https://www.biblegateway.com/passage/?search=Ezekiel+47%3A1-12&version=ESV], the Lord gives His prophet a vision of water flowing out from the temple in Jerusalem.  This imagery

On Veterans’ Day this year I had the unusual privilege of welcoming the Governor of the State of Indiana to Lighthouse Christian Academy in Bloomington, IN. Lighthouse is the small, Christian, K-12 school

Gentle Reformation
—
My Eyes Flow With Tears
Share this