Edmund P. Clowney was Professor of Pastoral Theology and President (for sixteen years) of Westminster Theological Seminary. Clowney was a leader in the historical-grammatical interpretation resurgence in the last half of the twentieth century that emphasized a Christocentric approach to interpreting Scripture. He has influenced men such as Bryan Chapell, Timothy Keller, and Dennis Johnson. His teaching on preaching Christ in the whole of the Bible, with a particular emphasis on how that is done in the Old Testament, has in many ways become the “gold standard” by which others on this subject are judged. His book, Preaching Christ in All of Scripture, published toward the end of his life, captures the essence of his teaching.

Preaching Christ in All of Scripture is a relatively brief work of less than two hundred pages. The book consists of three primary parts. First, Clowney takes the words of Jesus in Luke 24:44-45 regarding how all the Scriptures are about Christ, and then shows how that should influence our interpretation of the Bible. Next, he explains how to develop a sermon which leads the hearers to an encounter with Christ. Lastly, and most richly, thirteen of Clowney’s own sermons are included where he demonstrates ably and warmly how this type of preaching is done.

Clowney, after interacting with other scholars on this subject, develops his approach. One part especially helpful is where he highlights how to move from events and institutions in the Old Testament that foreshadow Christ to a proper way of proclaiming him by using the following illustration. The idea is to follow the green "Go" arrows. 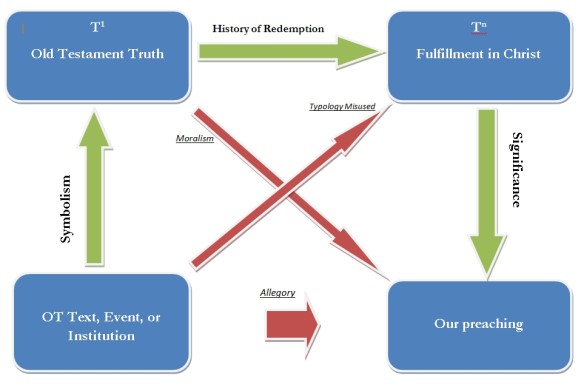 With this diagram, he begins in the lower left-hand corner and draws an arrow upward to represent developing the symbolism of the event or institution through proper study for sermon creation. From that truth, he takes the arrow to the right along the top of the box to encourage the event being related to the broader context of the Bible’s story of the history of redemption in Christ. He then takes the arrow down the right side of the box to represent finding the significance of these truths for the congregation as we preach to them.

Clowney also demonstrates with this illustration how this process can be short-circuited in three ways (represented by the red "Stop" arrows).

Dr. Clowney’s illustration helps guide the preacher toward a faithful declaration of Christ. His book, with its final section of his sermons an illustration itself of this type of preaching, is certainly worth having on one's bookshelf, whether to help in sermon preparation or to learn how to evaluate the faithfulness of preaching.

Yes, a gal joins the guys on this latest episode! Aimee Byrd, co-host of the Mortification of Spin podcast, comes on 3GT to discuss her latest book Why Can't We Be Friends? regarding

As a society, we’re scrutinizing much more closely the adults and young adults who want to work with and on behalf of children. And rightly so. We should do all we can